This week’s topic is all about new authors. Not new as in debut authors but authors that are new to me (and the other readers participating in Top Te Tuesday this week). And this is a fascinating topic. I have never before noticed how many new authors I read during a year. I have a goal for myself to read a book by each of my (five) favorite authors every year so they are not new but I have never counted how many new authors I try out. I am actually very pleased with my result. I have given 23 authors a chance this year. So far! I like that! To me, it says that I’m willing to take a chance and I’m not stuck in reading the same few authors over and over again. And it’s also interesting because the 23 authors are very different. There’s both debuts, classics, non-fiction and more. So what you’ll find below is my list of the Top Ten Authors that I have read this year and that I expect to explore further in the coming years; the best of the 23.
As always, the Top Ten Tuesday is hosted by The Broke and the Bookish.

* Okay, this is rather embarrassing. Apparently, I read The Clothes They Stood Up In back in 2008 and liked it somewhat … So he’s not a new author. Or is he, when I had completely forgotten having ever read anything by him?

Finally, the last installment in this short book shopping guide to Paris. On our last day, we visited the most commercial book store – which was also the store where I bought the greatest number of books. I do feel a bit bad about this since I prefer supporting the smaller bookstores which aren’t part of a chain but it just happened that this bookstore had a lot of books that I wanted. Also, this was the last bookstore so I knew I had to get everything I wanted here or I wouldn’t get it. 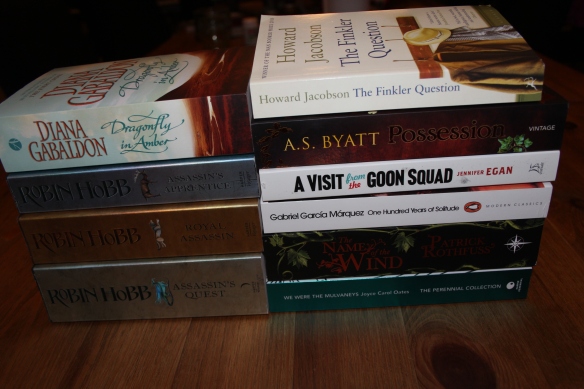 The bookstore I’m talking about is the WH Smith which is situated beautifully on the Place de la Concorde. I didn’t take any pictures of the outside since it’s exterior isn’t as interesting as the other shops (or more correctly, I was carrying a lot of books and just forgot…). I picked up 10 books in this store … and I could have bought even more but it was getting a bit hard carrying my stack as well as looking at more books.

I read the first of the Outlander series in 2010 and although I liked it, I never got around to picking up the next volume. I’ve heard a lot of people talk about how much they love these books so I figured I needed to read a bit further in the series and see if the like will grow to love.

My best friend Henrik has talked about this for years. He always says that I’m going to love it – but that I will bawl my eyes out because there’s parts of it that I’ll find very very sad. I hate reading about anything that hurts animals and there’s some of that in these books. At the same time, there’s amazing bonding between animals and humans and I hope that will overshadow the sad parts.

Jennifer Egan: A Visit from the Goon Squad

Winner of the 2011 Pullitzer Prize for fiction. I heard Jennifer Egan read a part of this book on the New York Times Book Review Podcast. She read a chapter where a woman is a public relation advisor for a dictator. She advises him to wear a light blue knitted cap – but he wears it the wrong way and everybody thinks he’s dying of cancer and it’s a mess. When she gets him to wear it the right way, everyone suddenly thinks he’s adorable and he gets the Nobel Peace Prize … It was so funny to hear and I can’t wait to read this!

Winner of the 2010 Booker Prize. I kind of have an idea about wanting to read the Booker Prize winners. So far, I’m not doing very good on that. But first step is to get the book and now I have this one, last years winner. It sounds kind of funny so I think it’ll be a good read. I really liked Skippy Dies by Paul Murray that was on the long list that year so hopefully, this will be even better.

I’ve written before about how A.S. Byatt intimidates me (here). But after having finished one of her novels and having watched the movie version of Possession, I wanted to read it even more so here it is.

I’ve read Love in the Time of Cholera by Marquez and loved it, and this should be just as good or even better. I almost got Memories of my Melancholy Whores instead but I think I’m going to be glad that I picked this one.

Patrick Rothfuss: The Name of the Wind

I’m just so excited about this trilogy. The second volume was one of my most anticipated of the year, even though I haven’t read the first one …! I so think it sounds so so good. It doesn’t hurt either that this edition looks so amazing!

Joyce Carol Oates: We were the Mulvaney’s

Well, JCO is one of my all-time favorite authors. I just love her. I think this was the second novel I read by her (the first being Blonde). It’s been several years and I really want to re-read it.

So there you have it. This was the last Paris update. So the books featured in these 4 posts are some of the books you’ll get to see reviews of on the blog in the future. I think I did pretty good on my book shopping – at least I’m very happy with the books that came home with me. Of course, I could have easily bought more… 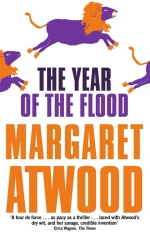 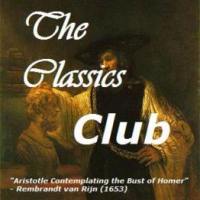