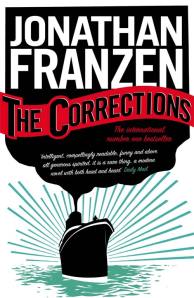 In November 2010, my father died. He had been sick for years and then one day in November, he got sick in the night, was taken to the hospital and died later in the day – totally unexpected. My mother had been taken care of him and always put herself second. She called me and told me about how their life was, but although I felt bad for her, although I listened to her and tried to help her, I don’t think I ever really got it. I don’t think I ever understood how hard it was for her – not only having to take care of him but also feeling somewhat good and especially relieved when he was finally put into a nursing home.
I was reminded of all this when reading this book.
This is a book about the Lamberts, Enid and Alfred and their three grown-up children, Gary, Chip and Denise. Each of these has their own issues they struggle with. Enid and Alfred still live in the home where they raised their children even though it’s slowly falling apart and to big for just the two of them. Alfred is struggling with early Parkinsons and maybe dementia, making it a real chore for Enid to take care of him.
Enid is desperately trying to keep her family together. She’s old-fashioned, has strict rules for how people ought to behave and is not always proud of the choices her children make. She comes across as a typical woman, set in her ways and determine to present herself to the neighborhood as having the perfect home and family.
This is a story of a mother and wife, desperately fighting to have her family together in her home for one last christmas. Enid lives a life where she has to have something to look forward to to be able to make it – a cruise, the family christmas – but when you pin all your hopes on one thing, you are disappointed more often than not.Her children each struggle with their own problems – and neither of them are really living up to their mother’s expectations.
Chip is the intellectual, he’s a struggling screenplay writer after he was fired from his job as a professor after having a relationship with one of his students. This not only lands him in a position where he owes his sister a lot of money but also makes him take a rather questionable job in Lithuania with his ex-girlfriend’s husband.
Gary is the eldest brother. He lives with his wife and their three boys. Gary wants to be in control. He’s desperately trying not to admit that his life maybe isn’t perfect – in that way, he’s a lot like his mother. He’s fighting what seems to be a depression and is having a power struggle in his marriage, especially since his wife can’t stand his mother.
Denise might be my favorite character in the book. She’s working hard to be what she wants to be. She’s an amazing chef and after a failed marriage, she suddenly get the opportunity of a lifetime to be the chef of a new restaurant where she gets to do whatever she wants and where the owner has money enough to support her no matter what. Denise, however, is struggling with her identity and sexuality and this is making her life rather difficult.
Both Denise and Chip are having issues in their professional life because of their sexuality – something that’s rather hard for their mother to accept and come to terms with – while Gary is the know-it-all who thinks he pretty much should be in charge of everybody.
But it’s so much more than this. This really dives into the relationship between parents and children and between siblings. It’s about children feeling more in the know than their parents ever were, it’s about all the things happening in a family beneath the surface – but sometimes bursting throughs in ways you least expect.
This was an amazing book – especially because of the way it’s written. On the surface, it’s the story of an elderly couple struggling with getting old and sick while their kids are trying to find their way in life, not always having time for their parents. But because of Franzen’s masterly command of language, there is so much more in this book. It’s by no means a dysfunctional family – or at least not a more dysfunctional family than all other families. It’s a perfectly normal and ordinary family fighting with the issues every family faces. And that’s what makes it into such a wonderful book.
I can’t say enough about the excellency of the writing. Not only is it beautiful, it’s also surprising. He uses a lot of words to describe a person – like Gary – and then in just one line, he sums up the totality of Gary’s relationship with his wife. Or at one point in the book, I expected something to happen – it didn’t happen, we switched viewpoint and a couple of pages went by and then it happened anyway and I got so surprised …
I noticed a lot of reviews are calling it a sad book – and it is sad what they are going through. A family with a sick father who’s slipping away is a family desperately trying to find it’s way. Franzen manages to make his characters so real, their struggles so real, their thoughts feelings and fears so very real that maybe it becomes too much for some readers – but I could identify with these people and recognize parts of my family in them so I felt right at home.
Sometimes, we want literature to take us away, sometimes we want a fantastic journey into an unknown reality where we can forget and just sigh with wonder. But sometimes, we need to learn about our own existence, learn about how the people around us are coping, by reading books that strike right at home. This is such a book.

46 thoughts on “Jonathan Franzen: The Corrections”